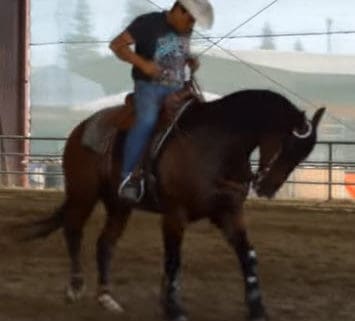 The issue of animal welfare is high on the agenda of competition associations as they work to clean up their public image to meet the modern day informed standards and social media scrutiny. Welfare statements and importantly their management can define an association in the eyes of the general public and those interested in sports.

Some associations are pro-active and progressive whereas others, like the National Reining Horse Association (NRHA), are just failing to deliver in their rules.

For many people, a horse show is a place where they see competition horses in the few minutes of showing under the judge. They see the big slides and fast spins and get enthralled in hype and entertainment; never seeing the alleged abuse that creates those circus tricks. With little access to the behind the scenes and the journey to the show ring, hiding the real experiences horses endure to become entertainment and instruments of success to the rider.

During discussions on the management of horse abuse at National Cutting Horse Association (NCHA) official events, it became evident that this is an association evolving to meet the welfare demands of horses. The discussion raised some serious contrasts between NRHA and NCHA and being miles apart.

On reading their respective current rule books, it became apparent that the NCHA write in a positive tone to ensure the improvement of their sport and image with precise definitions and responsibility. The NRHA seemingly reliant on vague statements fraught with gaps to protect trainers and their staff from conviction.

While both NCHA and NRHA rules state they apply to ‘the show arena or on the show grounds,’ the NRHA rules fall well short when set beside those of the NCHA.

A couple of the major notable differences are:

NRHA Rule Book states Section 3. Abuse. (1) No one shall abuse or mistreat any horse in any manner whatsoever on the show grounds. Abuse is defined as an action, or failure to act, which a reasonably prudent person, informed and experienced in the customs, accepted training techniques, and exhibition procedures, would determine to be cruel, abusive, inhumane, or detrimental to the horse’s health. (2) Individuals will be subject to the disciplinary procedures if it is determined that there was a willful abuse of the horse.

There is a reporting process with a $250.00 fee attached and the said complaint, with all required evidence, is heard by the NRHA in their hearing process. That process to be reviewed at another time.

The NRHA is using vague statements and has many loopholes that can be taken advantage of. What is a reasonably prudent person, informed and experienced in the customs, accepted training techniques? Based on personal observation and what is seen on video in warm-up pens posted on our website. The excessive spurring, jerking reins with the full strength of the upper body of riders, continuous over bending, stopping and spinning starting or ending with the techniques above, then acceptable practices is an endless statement that embraces just about everything that otherwise is considered abuse outside of the reining culture.

To the opposite, the NCHA Rule Book states:

Any act which the general public would perceive to be a violation of 35b. This includes such acts occurring not only in the show arena but also those occurring anywhere on the show grounds–the warm-up area, practice pen or any other location. A. If show management or judge at any NCHA approved or sponsored event discovers inhumane treatment or abuse of a horse, they should immediately bar the responsible party and horse from further competition in the event and the judge will give a score of zero.

They have a $50.00 fee for filing complaints post events.

How gratifyingly proactive is the NCHA for these two primary reasons:

To go that extra step, the NCHA actually document what abuse is:

On attending both official events to see this first hand, the difference is apparent. The NCHA Show Manager is active in overseeing the warm-up pens and event walk-in, passing stern looks and guidance on what is not acceptable at the NCHA events. They are monitoring, better termed policing, with vigor to ensure the rules are abided to, and the welfare of horses is the highest priority through their actions.

To the contrast at the NRHA event, the Show Manager was concerned with other duties of the show and animal welfare seemingly was low on the agenda as there were no active signs of policing or monitoring occurring. No rider was spoken to [disciplined] at the time of the incident to stop it, and there were many instances where intervention was required. The lack of documented abusive practices became apparent and reliance on vague statements being inadequate.

When is the NRHA going to install rules that deliver immediate and measurable accountability to all those trainers, competitors, and their help teams? Why do they continue to rely on ambiguous statements that make defining abuse of a horse a near impossible task for any complainant?

These are the questions that should be put to the NRHA. 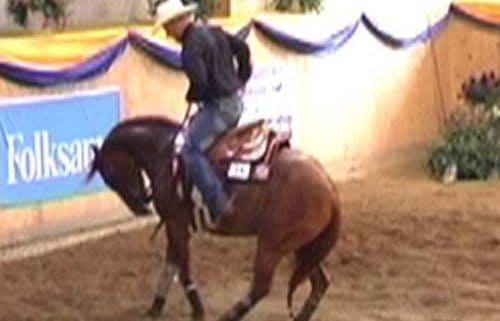 In a world where transparency of sports performance is a public expectation, the global body known as the National Reining Horse Association (NRHA) are seemingly defiant in meeting those expectations.

For sports people involved in racing, football, baseball, cycling, Olympic events to name a few, their performance is measured, reported and public scrutiny is par for the course. Their wins and excellence publicized, as like their breaching of rules in relation to drugs, bad behavior off the field, court or track. Their governing associations hold members to account to ensure the image and conduct of the sports develop in line with modern public expectations, ensuring the growth of their sport.

Over the past two decades, the racing industry has evolved with stringent rules and regulations for the conduct and the welfare of horses both off and on the course. A sport that draws a high level of public attention and scrutiny, they hold trainers, jockeys and horse workers to high standards. Any breaches are public knowledge and recorded. They understand that entertainment cannot be at the expense of the animals or the minority allowed to fester bad conduct and horse abuse.

The American Quarter Horses Association is making slow but steady inroads into stemming the issues surrounding the public perception of some of their events, particularly western pleasure which draws enormous public resentment toward the style and welfare of those horses. The transparency demonstrated with suspended trainers and individual public record along with drug violations. There is affirmative action with public statements regarding disqualification of members in welfare matters. They are becoming more pro-active in addressing animal welfare.

The NRHA states they are “an organization dedicated to the promotion of the reining horse. It serves as the standard setting body for the sport of Reining worldwide.” They publish welfare statements and codes of conduct for trainers, but what is the real truth behind these declarations?

The NRHA response to complaints on conduct and welfare matters is seemingly one of secrecy to the point that complainants are not advised of outcomes. There is no known accessible public record of complaints being handled, and no publically defined complaint handling procedures. In fact, it seems that they default all complaint handling to the courts, as seen in the case in Mark Albro and Kyle Weston. A process that it is out of the reach of many individuals and one that fails animal welfare cases on many levels.

In the recent NRHA Futurity where Casey Deary young 3yo horse, ARC Gunna Mark Ya, collapsed to the ground after backing up so hard its legs gave way. There was immediate outrage around the world and the NRHA spin doctors went into overdrive to stop the meltdown as the video went viral. The trainers statement plausible to those who needed to believe it and laughed at by others who had experience with horses.

There are other videos of what is deemed by horse pub ic and the general public as horse abuse at the highest level of competition. The videos show grown men and women aggressively spurring and tugging their horse’s mouths to such a point that onlookers cringe. In 2011 it caused a global outrage when videos appeared of leading trainers at an international FEI event in Europe. The image with this blog is of Craigh Schmersal at that event. The video was so graphic it was taken down by YouTube. The image being one of the only still accessible.

The NRHA is noticeably silent, the trainers or riders common response being that people are uninformed. What those trainers and riders fail to understand is that people do understand and the pain and suffering caused when >100 pounds of pressure being applied to a horse mouth through reins being jerked or sawn through a mouth, or spurring that leaves dents on their sides like pulverized steak. The bending of a neck that is scientifically proven to induce pain and suffering. One can only imagine the treatment of these horses away from the lights of the show pen if this is them on their best behavior. Those same riders are held up as legends of reining by the NRHA to this day.

It begs the question “Are the reining trainers a protected species by the NRHA?”

With over 19,000 members worldwide and ever increasing public outrage on the treatment of these horses, questions need to be asked of the NRHA. Their clandestine approach to what are important matters of public information should no longer be accepted. Members and the public should demand a halt to the surreptitious conduct and the NRHA adapt to modern society and scrutiny. They should publicly honor the statements made on their website and attached files through affirmative public action, transparent for everyone to see.

The Reining Horse is a seemingly sad story, much like that of the Tennessee Walking Horse, and the cruelty those horses endure to perform like circus animals in a show ring. Five decades later there is now only action being taken by welfare groups bringing about federal legislation to ban their practices. Those practices underlying in their associations and welfare statements but no affirmative action taken. What horses must suffer for the entertainment of a small few.

If you have lodged a complaint with the NRHA and not received a public response, we would like to hear from you. We can assure you we will keep your name anonymous.