The Face Of a Monster Horse Abuser

In a bizarre post, self-confessed and notorious reining horse abuser, Larry Rose, plots his return in the sport and people are welcoming him back open-armed. Often seen wandering around shows and major events, fellow trainers can be seen walking up to him and celebrating him for his past.

This Monster Horse Abuser has been in the industry for decades and applied his philosophies of cruelty to horses across North America and Europe. Held up by some top trainers as a great horseman, people have stories of witnessing appalling torment and cruelty in his desire to dominate. Leaving horses in stalls for days with bricks on the ground so they could not lay down, tied up in the heat for days to break their minds, appalling contraptions placed on their heads and gear, even teaching the Running W to pull horses down. It has proclaimed horses dying in his program were just not tough enough for competition.

Associated with some great horses of the past, all we can say is they must have been tough to survive him. His win at all costs – including the horse’s life,

Today, he provides coaching to some of the top reining trainers. It makes you wonder what he would be teaching them. He is not appearing on the banned member list – you would think his record and admittance of abuse would see him banned for life.

Hiding behind his family name on FaceBook of Marie Doyle he seeks to engage people into a new association (North American Reining Hores Association) citing the current NRHA is bloodsucking and run by totalitarians.

Hilariously he seeks good honest competition. A man who admits wiring jaws shut and many other vile and cruel antics under the name of reining horse training and showing. A person that to this day some of the leading trainers and general membership seek counsel and coaching in training horses in their desperation to win. God knows what he teaches them and the cruelty being done out of sight in barns and arenas.

Any person associating with this monster should be ostracized. 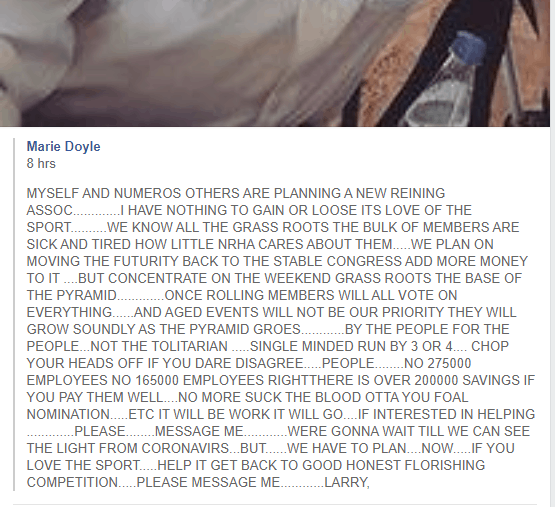