You are here: Home / The Welfare Issue / Justifying animal abuse and cruelty

Those who justifying or accept animal abuse

Confronted with horse abuse and poor welfare, the individual/s involved often do not reconcile with the facts before them. Why?

The Fall of the Hero Syndrome

Many people support horse abusers as they have created a hero syndrome around the individual. They are winning everything, they have a great story to tell, they know ‘who’s who’ of the sport. They have been around for a long time. Therefore they must be right. Surely you did not select a hero that was an abuser? A great example is self-confessed horse abuser Larry Rose

Horse abusers excel in deflection. They use their circle to go on the attack toward any person who dares raises abuse allegations. They are skilled and experienced in deflection and their tribe is easily influenced to perform as they want.

What happens when horse abusers become rule-makers and preside over judgments? A frightening thought for equine welfare.

In the enlightened world today where horses are now more performers and companions, than working animals, people’s expectations of horses have changed. People seek better communication and understanding, and therefore tolerance of abuse is considerably lower.

There are extremes on both sides of horse management; excessive domination and excessive coddling. The first, excessive domination, giving the most suffering to horses. The competition horses suffer as like the horses in the hands of those that want to demonstrate their ability to ‘make’ a horse do whatever they want on demand. Much like a ridden circus act. The rise of competition money earnings has given way to the classical learnings of horsemanship where time and patience were invested wisely.

Animal abusers or excessive dominators are often people who have learned their horse techniques through old-time stories, antiquated horsemen not fitting in between the range, and show pen. There can be a lack of control of ego and a desire to dominate at all costs. Those horse trainers and individuals learn through trial and error often motivated by frustration and possess no checks and balances to know right from wrong. They are shocked and surprised when their techniques come into the public light and get cited as horse abusers.

There are the abusers and/or dominators that create suffering for horses through their ignorance and inability to identify signs of health issues due to their lack of experience and knowledge. The horse is unable to communicate its pain, suffering, and stress without being met by further dominant behavior believing the animal is defiant. Those people hold themselves out as horse trainers and consider seeking advice as an indictment against their talent. Many horses suffer enormous pain and illness without care.

Many abusers and/or dominators have achieved short-term results where the longevity, both physical and mental welfare, are not of their concern. The animal is merely transited through their barn and as referenced by one leading trainer as ‘just another no-name’.

People identified as horse abusers often deny all allegations even in the face of overwhelming evidence. This may well be in the alleged case with Logan Allen of Ohio in the infamous ‘waterboarding’ that has seen many horseman and horsewomen across the world shocked and appalled and created an outrage on social media.

The pictures are clear, and the video is chilling for some to listen to as he attempts to justify his ability, actions and love of animals. He states what he considers plausible reasons for his actions like ‘the horse was licking his lips’ and ‘washing the mud off.’ On social media, people are not buying into his reasoning and statements.

A quick Google search and you find extensive commentary on this man. It is well summarized by Emily Johnson, a local trainer with Mountain Rose Horsemanship who said:

“Back in more the cowboy up, wild west days, horses were handled in what today, we would consider to be very coercive (bullying, forceful and intimidating) ways.

The question for everyone is “who should be applying the much-needed checks and balances to help protect horses from abuse?”

As people are more educated and aware, these coercive behaviors in trainers become less and less acceptable. The associations and member groups have a responsibility to put place the much-required checks and balances to ensure this philistine thinking evolves to modern practices and standards of animal welfare. 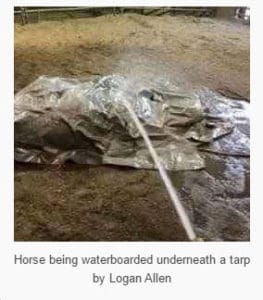 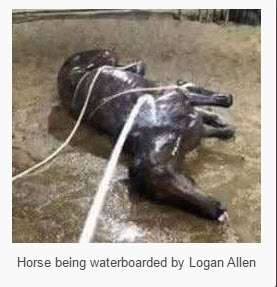 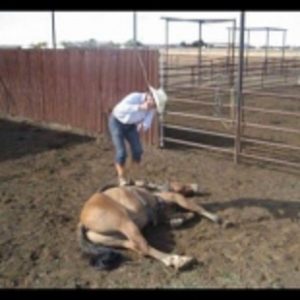